There are more ways of disagreeing than there are of agreeing. Agreeing is unproductive, in some sense, since it produces no new value. Disagreeing takes skill, however. 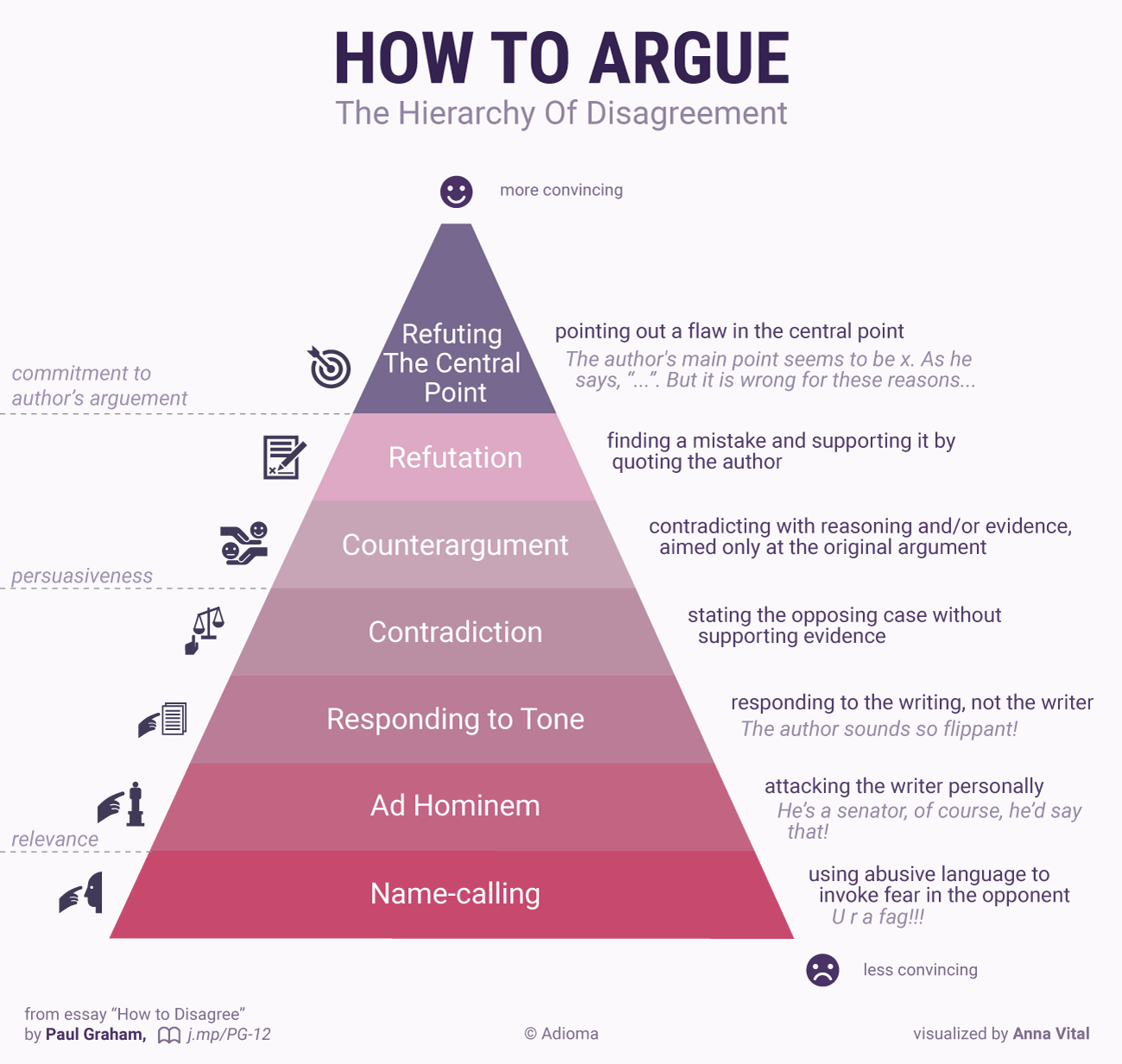 In his essay “How to Disagree”, Paul Graham classifies the ways of arguing a point. He suggests that they should form a hierarchy based on their strength and frequency of use.

The hierarchy of argument

Visualized as an infographic, the hierarchy forms a pyramid with the most convincing type of disagreement at the top. According to Paul Graham, it also happens to be the least common. Not only does it take some skill to identify the central point of an argument and to find how to refute it, this way of arguing also requires that the opponent commit to the central point of the argument. This is rare because we often tend to reframe arguments in an attempt to make the central point be something else.

This simple pyramid shows by way of a metaphor that the least convincing arguments are the most common and take the least effort to make. It also shows that the strongest form of argument requires the most acceptance of the author’s point which in itself is a form of agreement. So, the strongest form of disagreement includes an element of agreement!

Arguing And Not Offending

Arguments tend to be associated with negative emotions. We often fear that by disagreeing we offend the author. The pyramid shows that there are indeed a few ways of arguing that are necessarily offensive: the name-calling and the ad hominem attack. The closer an argument approaches the refutation of the central point, the less offensive it is.

This is somewhat of a paradox because the strongest form of disagreement is also the least offensive. It also takes the most effort. Of course, it comes with a risk of you failing to find a refutation as strong as the central point requires. But even a good-faith attempt to do so shows that you understood the central point. The author will know that you heard them, at least. That already is a form of acceptance.

The Basic Norms of How to Argue

The pyramid of disagreement can also be re-written as a set of rules.

This may be obvious but sometimes a sophisticated form of name-calling can sound positive, even endearing, such as “sweetheart”.

2. Do not attack the opponent’s persona.

Again, most of us would not use obvious forms of ad hominem attacks. The concealed ad hominem may be attacking the person’s authority to speak on the topic. For example, one could attack this piece by pointing out that the author is not a psychologist and, therefore, has no authority to give such advice. This is true, and even relevant, but it is still a weak form of argument because it does not refute anything in the article.

3. Respond to the substance, not to the tone.

How something is said often matters to us more than what is said. This is true when we prioritize our feelings above logic. But feelings are not always paramount. If a doctor announces that you are about to become a parent, for example, you will not remember their tone as much as the content of their statement. So when arguing, give the opponent the benefit of the doubt listening to the substance and not so much the form. Another form of this would be nitpicking: one can find a typo in this article and dismiss the whole piece altogether.

4. Do not contradict without offering supporting evidence

5. Do not argue in general, argue THEIR central point

It is easier to pick one of the minor points and argue that which is more convenient. This is a form of intellectual trickery. This tactic can be accompanied by attempts to make the author think that they misunderstood what their central point was. Even if sophisticated, this is still a form of aggression.

6. Do not use their own words to argue another point

Even more refined a tactic, is quoting them to support some other point, not the one they made. This is again simply a trick that, if caught, will make them angry. Do not risk being caught doing this. You may lose their trust.

7. Do point to a flaw in their central argument

If you do see a mistake in the central argument, state it by quoting them and providing supporting evidence that the opposite is true.

If all people followed these seven rules, the number of arguments would sharply decrease. And I do not mean a sevenfold decrease. Probably much more than that although I don’t know how much. People would slow down to process their arguments, attempting to identify the central points, and in the process eliminate responses based on logical fallacies and their cognitive biases. We would not all agree as a result, but we would become more deliberate in what we argue about.

The infographic above is based on the essay “How to Disagree” by Paul Graham.

Read more on: Paul Graham
<
The 16 Personality Types by Myers-Briggs and Keirsey
>
The Meaning of Life According to Different Philosophies